July 6th and The Half Life of a Tremeloes song

The morning of July 2 was mystically unique. Even though that Summer of 1967 had already been unlike any other, as they’d each proceed to be until decades later, this day sadly welcomed tragic new shadows through the eastern windows of our house in Falmouth, Va.

It was during that tenuous and dark period that our house, our days, our routines all were transformed from a once normal-ish and relatively stable suburban household into a nervous moment to moment, hour to hour sequence of questions and answers, hopes and disappointments, arrivals and departures. Each day brought more gravity to an already pensive situation. Everyone behaved differently, as if bad news lurked there just out of sight around every corner of each pensive mind.

For the year or so up until that morning, my awareness of our father’s physical condition was no more than a dotted line history of observed images and overheard comments. A nagging and worsening limp. More tests. A slipped disk. Exploratory surgery. A “tumor”. A hospital bed that was set up in the den. One terrible Sunday morning my Dad and I were the only ones home, he sitting on the living room couch and me before him on the rug among the funny papers when one of his tortuous episodes of indescribable pain descended for which I was useless in providing any sort of consolation or comfort. He wanted me to leave, encouraging me to with as much grace as he could muster between winces. But all I could do was merely stay there with him, afraid to compound his pain with any affection that might mean more discomfort. I sat and stared, paralyzed with helplessness.

I’m now realizing that I’ve never intently wrote about the death of my Father. It wasn’t until I was 33, and a father, and with the wondrous resource of a bunch of amazing, caring and capable counselors, I was able to mourn my Father’s death, at least what those last months and days wrought for him, from HIS perspective. We all mourned, but hey...

It was a reeeeal drag for him.

As a kid, and without any context, my curiosities related to the when’s and where’s (“when is Dad coming home from the hospital?”, “where is he, anyway?”) and not the what’s and why’s. Those questions were either not asked and certainly not directly answered when they were. My younger sister and I were too young (she 6, I 10) to be included in the sober realm of unpleasant truths. “The doctors say soon.” “He’s up at Sibley, hon…”

But after months, that very absence of specifics allowed the truth to impel its way to be sick-sensed, heart-felt and bone-known. His physical absence was also acknowledging at least a tenacious problem, if not a more threatening one.

But as that morning arrived and awaited both my mother and me, her sobs were what I now know awakened me and beckoned me down the hallway to the window seat where she managed to collect herself a bit, raise her head and plainly say “Jonny honey, the doctors say your Dad’s probably not going to make it.”

The bad news was no longer just around the corner, and I was now included in it, closely surrounded now with that adult world, which had by then for months been the realm of the desperate and reeling elders. In four more days, my younger sister would as well be gently introduced to not only the reality of a lost parent, but to mortality itself.

But for me, those next 4 days were spent mostly alone with the radio in my bedroom. Trying to “will” a miracle through the prescribed prayer, trying to “will” my mind to have faith in a force I could not see as the last desperate hope: “Miracles do happen, if you believe enough and pray hard enough”. My thoughts, wonders and worries were for no one but my Father as I squinted through Hail Marys and Our Fathers until my vision blurred. And trying, trying to believe that a miracle could, no wait WOULD… WOULD happen!

All the while, through the glaring heat of those July days, sunglasses upon somber faces would repeatedly appear then retreat up and down our front walk— nodding, whispering, sniffling over covered dishes and casseroles.

My radio continued to play the hits. WFVA, throughout the day, all the hits we play.

I was thus indoctrinated with some messages—literal, lyrical, musical, mystical—from two songs in particular, probably ranked numbers 1 & 2 on the charts by the frequency of their spins.

The first was Frankie’s Valli’s Can’t Take My Eyes Off Of You, a not particularly innovative piece of music, not at all edge-y or rocking. It was pretty much of a Vegas-style big band arrangement oscillating between confessional sanctity and full out horn-gusted bravado. In the former sections, Frankie professes his appreciation of a love by cooing “And I thank God I’m alive”…which stung every time it went by before proceeding into the big celebration of life and love, which seemed to me a finger to the nose gloat. I hear it now to this day and it still pisses me off a bit but, at the time, I thought “What does HE know? All that gladness. Well, f-him... MY Dad’s gonna DIE!”

But that was that…no other push-able emotional button remains from that Jersey boy's splendid singing.

Not so the case for the Tremeloes’ Silence Is Golden. Its intro with the bitter-sweet and not-quite-in-perfect-tune harmonies announced yet another three minutes of poignant admission that “Silence is golden, golden…but my eyes still see”, all through what is one of the most painfully beautiful and elegiac melodies ever. Like the apple gifting scene in Night Of The Hunter, it spoke to my heart and soul, and branded both. To this day, that song still brings sadness to my soul, and today of all days, July 6th, I’m thinking of my Dad, appreciating his ordeal, knowing he wouldn’t see his kids grow up, grow old with his wife and family or even know they’d be alright after he was gone. I like to think that we are, but I’m thinking of all the dear friends and loved ones whose vital and vibrantly immediate light here has been forever darkened, and I'm honoring their lives, my love for them, and respecting their life forces that now emanate and vibrate through the ages in more mysterious ways.

But, alas,  I won’t be listening to those two tunes. One is just too beautifully painful, painfully beautiful, and the other one, is well…know what? I'm happy for you, Frankie!

Here's to Those We Love Who've Gone 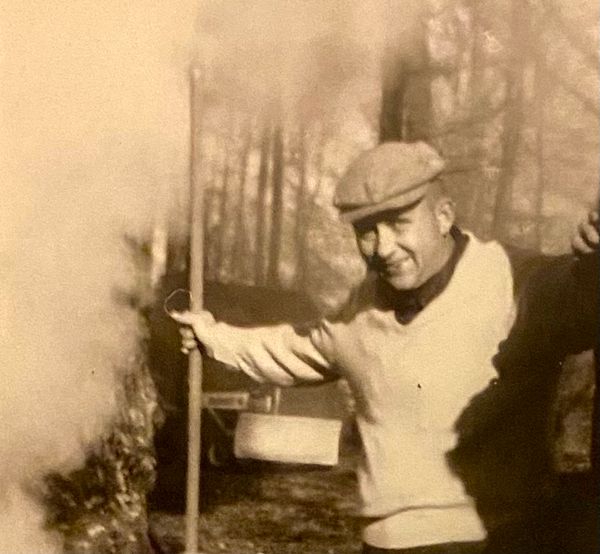