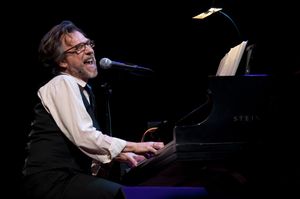 The group went on to be nominated for 5 Grammy Awards, winning  2: for Best New Artist & Best Arrangement for Voices (One of Jon's roles in the group).

Since then, he's has not slowed down as a performer, composer, arranger, producer, songwriter and musician. His works have appeared in films, commercials and episodic dramas and comedies, and he is highly sought after studio session performer appearing on many recordings.

His songs have been covered by artists such as Linda Ronstadt (Her 80’s hit “Want Love? Get Closer!), Tom Jones and Kenny Rogers, and he's the long-time keyboardist/vocalist band member with Mary Chapin Carpenter, with touring stints for countless others including Rodney Crowell, Dixie Chicks, Peter Wolf and Eric Lindell.

His work has been recognized repeatedly over the course of many years by the Washington Area Music Association (WAMA), which over the years has awarded him over 20 "Wammies" for Vocalist, Instrumentalist, Songwriter and Song of Year.

As a songwriter, Carroll has been likened to artists as disparate as John Prine and E. Annie Proulx, with songs as insightful as they are rhythmic and soulful. He’s an in-demand hired hand, and performs as well with his own band, but to hear Jon perform solo in an intimate setting is an all too rare treat!

“Jon Carroll is a one man band, a poet, a songwriter, a singer of every kind of song and above all, a musician’s musician…and I can also attest to his being a not-to-be-missed performer.”~Mary Chapin Carpenter

“… now the most reliable sideman in Washington, D.C., puts out another just mere months later.”
~NoDepression.com

LOVE RETURNS  IS…
“…a vibrant reminder of what Carroll does best, whether it's conjuring vintage R&B/soul sounds, or composing evocative ballad(s) which manage to bring to mind both novelist Annie Proulx and John Prine, or coming up with a country ditty as innocently engaging as On the Front Porch.”

“…he headlines this session with talent and charm to spare.”
~Mike Joyce, The Washington Post