Back to all posts

On The Perverse Effects Of An Upside Down Music Business 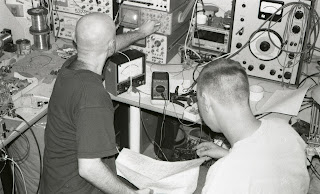 I began reading Mohamed Sadek’s piece A Musician’s White Whale: Perfectly Recreating the ‘Funky Drummer’ Beat  with piqued interest as a music maker, session musician, composer, etc. Its subject and his recreating efforts intrigued me. But as I read further my arcane attention became less benign, and my once eager interest became disgruntled astonishment at the nascent then firmly established creative procedures within what was once an industry comprised largely of creators creating with others who physically performed and recorded body-felt inspired music.

In the “classic” rock era of recording (as in years before) the prevailing process was in pursuit of an ideal: players, singers in synchronous simultaneous fashion. There was an innate veneration informing each individual that became manifest in an ensemble effort.

The current laboratory-like process of seek, scan, scroll, review, formulate, emulate and import seems antithetical to that collaborative performance-based spirit, more aspirational than inspirational. I doubt the joy during the process as well as the gratification after is at all comparable to those found and shared after a live ensemble performance which was also recorded. Having worked within both live ensemble tracking processes, “one at a time” live tracking as well as file import-based "loop productions", I’ll attest to the disparity between the overall goofy zeal that players show when listening back for the first time to that "nice take" together in the control room, or on the headphones they’re all wearing, and the mere successful completion of a cobbled together track comprised of bits and pieces of performances recorded elsewhere by others.  I've indeed been involved in both processes and know that for me there's no comparing the voltage and sweat of those two particular giddy "celebrations".

Production processes have steadily and constantly innovated, adapting to fashion/style/trends etc and ushered toward larger economic compulsions. But the most brilliant innovators and pioneers (such as the oft cited and reasonably artistically worshiped drummer Clyde Stubblefield) were bringing their own body, mind, heart and soul to that event, creating music anew informed by vast and myriad influences, such as ever was the case. See this piece by Brian Eno.

Rap, Hip-Hop and other Avant-Garde brought audio sampling into the process, which led to further “needle-drop” tactics that were, and are still, exciting within the paradigm of anything becoming art, with and to which I truly  agree and occasionally subscribe. Digital recording has accommodated further and admirable “democratization” of musical creativity with prerecorded loops that undoubtedly allow more meagerly-funded and otherwise under-resourced artists to create on a higher, daresay, competitive level.

The forensic aspects of re-conditioning recorded music have always been fascinating, as any conversation with a “remastering” engineer will bear out, especially those who technically revitalize older, deteriorating ad/or primitively recorded pieces (hello Smithsonian Folkways).

I'm all in for creativity for its own sake, live and let live, live and let play. But I’m also an advocate for righteously corrective legislative efforts such as Fair Play/Fair Pay, and have been to Capitol Hill to help grass-roots lobbying for the rights of my fellow musicians who’ve been historically excluded from performance royalties by dint of the fact that US terrestrial radio had never been required to pay for those repeat usages via a legal loophole unchanged since the 1920’s. Those remedial efforts have been marginally successful despite--and perhaps due to--the confluence of transitions in market paradigms precipitated by non-unit based sales, digital streaming and subscription platforms. These developments--beginning in the mid 1990's--and the opportunistic measures ushering them to the fore have been the culprit for a tragically decimated income stream for songwriters and musicians. Perhaps not as much for deejays, but that’s another story.


There are, nevertheless, some fascinating forensic aspects in the re-conditioning of recorded music that have always proved fascinating, as any conversation with a “remastering” engineer will bear out, especially those who technically revitalize or restore older, deteriorating ad/or primitively recorded pieces (hello Smithsonian Folkways) to new improved sonic appreciability.

But when this current "blueprint the lick" niche market emerges (and I’m surely not intending to disparage anyone’s admirable work ethic here, much less those that are cultural and arts-based) whose very existence was born from the sonic pursuit of a “more affordable” requisition option other than the statutory norm, thus enabling the "client/buyer/creator" to sidestep higher fees and royalties that would be paid to the owner of the master recording (which could perhaps eventually trickle down to the artists, players, producers, etc., but more often does not) then proceeds elaborately, intricately further by laboriously recreating as many nuanced aspects of that original artistic expression as possible, the line from homage-like dedication is thereby brazenly crossed into the realm of “just business”. At that point, it's cultural appropriation and exploitation, all procedural artistic admiration notwithstanding.

I've personally and repeatedly seen my work as a writer, arranger and player become part of a larger licensed income stream for other business entities. I've seen musical notes that required reverent artistic deliberation and many hours formulating, creating and expressively performing end up as commercially marketed sheet music, the proceeds from which I've seen nary a penny. These situations aren’t rare. Artist's recording deals are signed and recording sessions (contracted and not) eagerly occur, but by the time the lucrative “back-end” is in someone else’s pocket, any efforts to reclaim some rightful share would require lawyers, energy and time. As many a struggling (most are) artist might attest, we’ve got more creative things to do. The litigious process can not only sap one’s muse, it can eat one's spirit along with other more wisely spent elsewhere resources.

In light of this all, I read here of a fellow musician, surely blessed with formidable talent and developed craft, glowingly praised for his entrepreneurial spirit and industrious efforts in meticulously recreating/re-manufacturing/reselling what someone else has already created, thus achieving a purvey-able facility that surgically removes the remunerative rights of those who are the original conveyors of such work as well as those of their survivors.

On the one hand, it’s quite impressive. But on the other, it sheds a scorching and unbecoming light on this increasingly more normalized but lamentably vampiric era. Whose hands made that nearly exact but always better music in the first place?