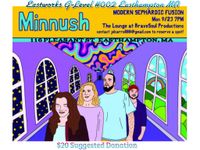 Studio Concert with Limited Space Please RSVP to reserve your seats! MINNUSH--Bringing Sephardic Music Into The Now! This will be a very special show! These guys are close to my heart, as I co-produced a collection of Sephardic songs with Susan Gaeta (protege of Flory Jagoda, the "Jewel of Sarajevo") a while back.

She has subsequently brought the music further into altogether new territories with a new and vibrant new group, Minnush.

I heard them in Washington DC a few months ago, and simply fell in love with the presence, the journey, the grooves, the musicianship and the charming ebullience with which they honor and present this fabulous music of the Spanish Jewish people who became the Ladino speaking Sephardim of the Balkan States.

The group had its beginnings in Gina’s Virginia Folklife apprenticeship to Susan, who was apprenticed to the great Flory Jagoda ten years earlier. It grew out of an urge to do what folk music has always done – to naturally incorporate new influences and reflect the world around it. In this way, Minnush adds elements of American folk and jazz, while shedding light on the immigration and refugee stories that the songs carry. Minnush is serious, joyful, forward moving and eminently fresh.